Ischemic strokes make up about 80 percent of all strokes. Just as a heart attack occurs when there is insufficient blood flow to the heart, an ischemic stroke (sometimes called a “brain attack”) occurs when there is a sudden interruption in blood flow to one or more regions of the brain. Like all cells in the body, neurons and other brain cells require oxygen and glucose delivered through the blood in order to function and survive. A few minutes of oxygen deprivation—called ischemia—is enough to kill millions of neurons. Moreover, ischemia can provoke inflammation, swelling (edema), and other processes that can continue to cause damage for hours to days after the initial insult. Obstructive blood clots are the most common cause of ischemic stroke. Clotting (or coagulation) is a vital function that helps prevent bleeding when a blood vessel is damaged, but clots can also obstruct normal blood flow. When a clot forms in association with the wall of a blood vessel and grows large enough to impair blood flow, it is called a thrombus; a clot that breaks off the vessel wall and travels through the blood is an embolus. A cardioembolic stroke is caused by a clot that originates in the heart. Cardiac emboli are most likely to form in people with heart conditions such as atrial fibrillation (AF, an irregular heartbeat), heart failure, stenosis, or infections within the valves of the heart. They may also occur post-heart attack.

Another contributor to ischemic stroke is chronic atherosclerosis, which is a buildup of fatty deposits and cellular debris (plaque) on the inside of the blood vessel wall. As atherosclerotic plaques grow, they cause narrowing of the blood vessel (a condition called stenosis). Atherosclerosis can also activate cells involved in clotting. Immediately after an ischemic stroke, the brain usually contains an irreversibly damaged core of tissue and an area of viable but at-risk tissue called the ischemic penumbra. Restoring normal blood flow—a process known as reperfusion—is essential to rescuing the penumbra. The longer reperfusion is delayed, the more cells in the penumbra will die. The region of brain tissue that is finally damaged is called an infarct.

If a stroke were a storm, a transient ischemic attack (TIA), or “mini-stroke,” would be an ominous thunderclap. Symptoms of a TIA are similar to those of a full-blown stroke but resolve within 24 hours, typically in less than one hour. Still, the short-lived nature of TIAs does not mean that they leave the brain unharmed. In about 40 to 50 percent of people who have experienced a TIA, a tiny dot of infarct can be seen by brain imaging.

Even when there is no sign of brain infarction, a TIA is both a warning and an opportunity for intervention. While someone who has experienced a full-blown stroke has a two to seven percent risk of having another stroke within the next 90 days; the 90-day risk of stroke following a TIA is 10 to 20 percent. In many cases, TIAs may be caused by an unstable clot that could create a more permanent blockage within the brain’s blood supply at any moment. Fortunately, there are a variety of treatments that can reduce the risk of stroke following a TIA, including medications to lower blood pressure and inhibit blood clotting. If necessary, surgical procedures can clear away plaque in the arteries that supply the brain, or a procedure called stenting can be used to widen the arteries. Severe strokes could be avoided if more people sought medical attention after a TIA. 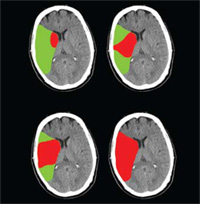 Immediately after an ischemic stroke (top left), a core of irreversibly damaged brain tissue (red) is surrounded by an area of viable but at-risk tissue called the penumbra (green). Unless blood flow is restored quickly, the tissue within the penumbra will be lost (bottom right).

An intracerebral hemorrhage occurs when a blood vessel ruptures within the brain. Several conditions can render blood vessels in the brain prone to rupture and bleeding. Chronic hypertension and a condition known as cerebral amyloid angiopathy can weaken the blood vessel wall. Poor blood clotting ability due to blood disorders or blood-thinning medications like warfarin further increase the risk of bleeding. Finally, structural abnormalities that can form in blood vessels during brain development also a play a role. For instance, an arteriovenous malformation (AVM) is a tangled mass of thin-walled cerebral blood vessels in the brain. AVMs are thought to be present from birth in one percent or less of the population.A subarachnoid hemorrhage is the rupture of a blood vessel located within the subarachnoid space—a fluid-filled space between layers of connective tissue (meninges) that surround the brain. The first sign of a subarachnoid hemorrhage is typically a severe headache with a split-second onset and no known cause. Neurologists call this a thunderclap headache and it demands immediate medical attention. The rupture may occur in an AVM, but typically it occurs at a site where a blood vessel has weakened and bulged, called an aneurysm. Aneurysms affect as much as one percent of the population, and are sometimes hereditary. NINDS-funded studies have shown that the risk that an aneurysm will rupture is related to its size and shape, its location, and the person’s age. The risk is increased by smoking. Information about these risks helps doctors advise individuals on whether an asymptomatic aneurysm should be treated. Immediately after an ischemic stroke (top left), a core of irreversibly damaged brain tissue (red) is surrounded by an area of viable but at-risk tissue called the penumbra (green). Unless blood flow is restored quickly, the tissue within the penumbra will be lost (bottom right).

Unlike other tissues in the body, neural tissue normally is shielded from direct contact with blood by the blood-brain barrier, which is a tightly sealed network of cellular and extracellular components that lines blood vessels in the brain. The blood-brain barrier is permeable to oxygen and other nutrients in the blood, but generally impermeable to red and white blood cells, and large molecules. During a hemorrhagic stroke, these cells and molecules are released en masse into the delicate environment that surrounds neurons. Meanwhile, the accumulation of blood, known as a hematoma, can cause an increase in intracranial pressure that further impairs normal blood flow and damages the brain by compression.

info@strokeshieldfoundation.org
© Copyright 2019, All Rights Reserved
Dr. Jeffrey Thomas Stroke Shield Foundation
Disclaimer: You acknowledge that the information on this website is provided "as is" for general information only.